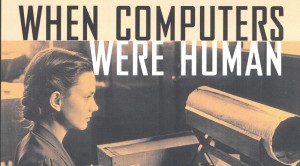 This is a book about heroism, technology, organization and hard work

Before we had electronic computers, before we had machines to do computation for us, we had staffs of workers who processed information.  They sorted records, searched for data and processed numbers by hand.  These people, usually called “human computers” lay the foundation for the modern technological era.  They had their heyday during the second world war and largely vanished during the 1950s, as the inventors of the new computing machines wanted to distance their creation from the human beings they replaced.

At the 2009 CrowdConf, the human computers were recognized as the progenitors of crowdsourcing.

The book is available through Princeton University Press.